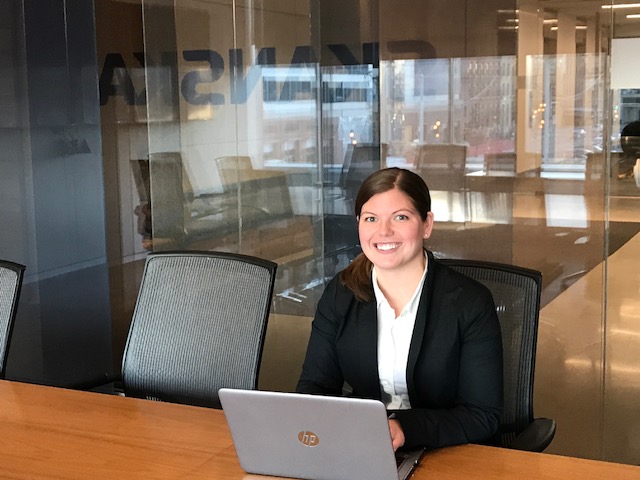 In an industry where business is booming, and talent is scarce, many companies are resorting to aggressive recruiting to lure mid-level professionals with significant salary increases to fill those gaps.

The temptation is real but not for Bethany King who has been with Skanska for more than 7 years and plans on staying right where she is.

Currently working as a Project Manager, she also acts as Chair of the New England Chapter of the Skanska’s Women’s Network and is a member of the Skanska Sustainability Task Force. As you would expect for an organization of this size Skanska offers its employees a myriad of opportunities for professional training and development, a culture that believes in work/life balance and a clear set of values that encourages a safe and healthy work environment, transparency and integrity, team work and an unwavering commitment to their clients.

Bethany says she never would have imagined in her days at Plymouth North High School that her love for math and science would lead her to a career in construction. It did make sense that her exceptional skills landed her at Worcester Polytechnic Institute studying Civil Engineering and she loved every minute of it. She was involved in club sports and became President of the Sorority, Alpha Xi Delta, which she says, “helped me to develop my people skills.” She worked on the Neponset River Bridge project under J.F. White Contracting Co. during her sophomore and junior year internship, and says it opened her eyes to the differences of working on paper and being part of a team that produces a physical result. The experience, along with the recognition of the skills she could bring to the table, led her to focus on Project Management courses in the Civil Engineering department during her remaining years at W.P.I.

Upon graduation she was immediately hired at Skanska as a Project Engineer and was assigned to the revitalization of the L.B. Johnson Apartments in Cambridge. She says the sustainability components of the project drew her in and served as a terrific learning experience. From there she moved on as an A.P.M. on 101 Seaport Blvd. (Skanska’s New England Headquarters) to P.M. in 2016 working on 121 Seaport Blvd., followed by a year-long secondment within Business Development.

As life would have it she got married along the way and had 2 kids now ages 1 and 3, adding to the challenges of maintaining the perfect work life balance we all dream about. Fortunately for Bethany she has a few great things going for her that include an equal- time husband, supportive family members (whom, she said, she would be lost without) and a work culture where she says, “flexibility isn’t just a woman’s issue but about doing your job well and being recognized and rewarded accordingly”.

One of those rewards has been the ability to work on the Skanska Young Professionals Network from 2013-2014, the Skanska Sustainability Task Force and most currently the Skanska Women’s Network Group as the local chapter Chair, a group looking for ways to create the most impact through networking, informational programs and mentorship. She says she could “just come to work every day and do my job—but I am most proud that I’ve been able to go above and beyond that. I’ve been given the opportunity (by Skanska) to make a difference”.

As much as she loves her work as a Project Manager, she says that her engagement in the Skanska groups has broadened her role and has given her a deep sense of investment. She sees that investment as one day developing into a Senior P.M. position of a very large project and eventually becoming an executive decision maker for Skanska.

Her advice to anyone looking to further their career in the industry is to take advantage of all the city has to offer. Boston has an innovative construction market that foster’s communication, idea sharing and relationship building. Seek out mentors (yes you can have more than one) and work to earn their trust and respect so they will advocate for you through-out your entire career.

She says you don’t have to be a math and science expert to have a successful career in construction. “First you have to find your passion and make it work for you. Don’t just do your job—always do more than expected”. It’s an equation that may be challenging for some to follow but for Bethany it has equaled success. Her passion is translated into all that she does.

Thank- you Bethany for sharing your experiences and supporting our mission of Building Women in Construction!