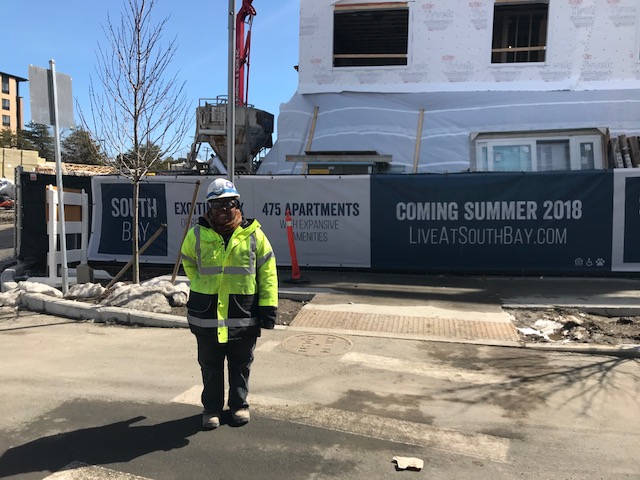 The data shows that the advantage to passing down occupations is the connections the parents can offer that can give their children an opportunity to start from a better vantage point than they did. Whether through inheriting a family business, getting an internship or simply putting a good word in with a colleague or friend can all be a deciding factor in the path their children will take.

It is not so unusual then for Lynda Bellamy to have chosen a similar career path to her mother, Shakil Linda Ob, Steward, Local 328. BWiC profiled Linda in January (Insert link tom article) and has clearly passed down her strong work ethic and passion for supporting women in trades.

Lynda said she knew she was destined for the trades but never considered carpentry as an option. She saw what her Mom went through working with dry wall and wood chips and quickly decided that was not what she wanted. Having grown up in Milton she had the option of attending Milton High School or Blue Hills Regional and chose the latter based on advice from her guidance council. Upon graduation she considered applying to schools for degrees in electrical engineering but even with scholarships she realized she would still need massive loans while working part- time so she instead went to work for an open shop where she was sure she could get a solid education. That didn’t work out quite as planned so she joined the union and has been working steadily to date.

With prior experience in under cabinet lighting and wiring, she is now able work in different areas including: underground trenches, pulling temp wire, drilling, supports and box outs at the new apartment development complex at South Bay.

Her advice on best practices is “don’t be that person”. She gets up extra early to arrive “on time” which is technically earlier than required. She says “on time” is late and sometimes she will set 3 alarms to insure she has plenty of time to gather her tools and PPE and arrive totally prepared. She enjoys working hard and tries not to stress out on outside factors, but rather focuses on getting things done. She is not afraid to tactfully stand up for herself but has also learned to pick her battles.

As an apprentice at McDonald Electric she says she has seen few women on the project work site, depending on the trade, but she is typically the only woman most of the time. That can create certain challenges such as no designated women’s bathroom and learning to get along in a mans environment. Lynda says she has met and worked with a variety or personalities, some easy going and some quite difficult, but she says no matter the situation she “never lets anyone steal my happy”.

As a young apprentice, she said it can tough getting the opportunities to learn on the job that is required to grow, even though it is “their job to teach me”.  But she said she has been fortunate to have been introduced to her mentor by way of her mother who has been a solid resource for her to gain advice and learn of outreach opportunities. One of those opportunities has been to become involved in the women’s committee at the 103-the first of its kind in the history of the union- so that women’s voices can be heard. She says change has typically been resisted but is optimistic that attitudes are shifting with Kenell Broomstein, the first woman of color to be named as business agent for the IBEW.

Lynda envisions becoming a teacher at the JATC one day and bring a new approach to the classroom providing alternative curriculums that will cater to all learning styles. She says it’s “one thing to know something and another to teach-there is always a better way to do it”. Based on her exemplary work ethic and determination it won’t be long before we see those improvements.

Thank -you Lynda for sharing your experiences and supporting our mission of Building Women in Construction!