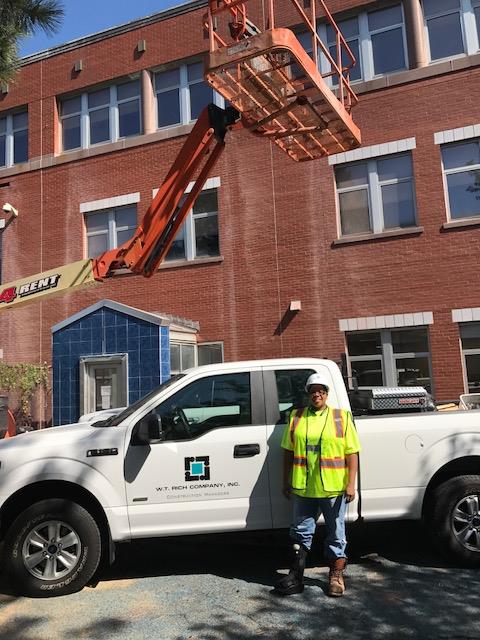 Work for women in the trades in Boston has seen a rise in the last 5 years, thanks to the efforts of the Mass Gaming Commission’s Wynn Boston Harbor Casino project and advocates such as the Policy Group on Trades Women’s Issues (PGTI), but it is still not where it needs to be. Liz Skidmore, one of PGTI’s co-founders was recently interviewed and shared that, “Women in construction apprentice programs in Massachusetts leaped from 180 in 2012 (4.2% of all active apprentices) to 473 (6.9%) in 2016.” And although a significant increase, PGTI believes those numbers should reach 20% by 2020.

One of the reason’s women tend not to join the Trades’ is simply due to the lack of awareness of the opportunities available. Typically, a woman will be struggling to support herself and her family on dead end minimum wage jobs, and a friend will mention an up- coming informational session on apprenticeship programs suggesting she attend. It wasn’t much different for Mikey Myles, now 19 years in with the Local 67 Carpenters.

It was 1998 in Roxbury, Mikey was 21 years old, working at various minimum wage jobs, doing some occasional deck building with a friend and of the verge of getting into serious trouble. As previously mentioned to be the usual case, another friend informed her that the Carpenters were conducting interviews. She attended, asked “When can I start?” and started what would be a life-changing chain of events. With no formal education (she dropped out of school in the 10th grade) she earned her GED and began her journey as an outsider as a black woman in a man’s world. She faced discrimination and resistance, but determined to be successful, she took the high road by showing up early, asking questions and speaking out when she was not treated fairly. After 4 years of hard work she left to live in Texas due to family needs but returned after 2 years and picked up where she left off. She says luckily, she “kept her book” while in Texas, meaning she kept paying her union dues, maintained her education status and so remained a union member in good standing.

She praises the Carpenters Union as they were CORE friendly and did not hold her back due to her record and have supported her efforts to this day. In 2005 she became a journey person and has never looked back.

One of the greatest lessons she has learned and would like to share is that to receive pension credits you are required to work a minimum of 9 months out the year. She looks back and says if she had been more aware of the importance of that she would have managed her time better. (cycle of work) So for Mikey, although she has 19 years with the Union, she only has 11-12 pension credits, delaying her retirement that much longer. Her hope is that by sharing her mistakes other women in the field can avoid them.
Currently she is working permanently for W.T. Rich and could not be happier. She says “the W.T. Rich family don’t give a hoot what color you are and that a pat on the back from Jonathan (the owner) is priceless!” She says when she wears her company t-shirt and people ask her if she works for them she gets such a great sense of self-worth and pride.

Mikey’s average work day entails working 7:00 a.m. to 3:00 p.m., sometimes 6:00 a.m. to 2:00 p.m. depending on the project and work required. As a carpenter that work can include rough finishes, exteriors, interior’s, residential and/or commercial work. She says that over the years she has met some great people and is proud of every project she has worked on, large or small, but it is all part of the learning experience. She stays connected by keeping engaged with the Carpenters Women’s Committee and the Mass Trades Women’s Association and makes sure to take advantage of any learning opportunities the Union offers on her down time. She holds numerous certificate and certifications and is a licensed contractor.

Mikey says she had her share of struggles and could have avoided a lot of troubles and heart ache had she known about the options at an earlier age. She hopes that more young women are educated about the terrific opportunities that are available in the Construction Industry and suggests that reaching out to them at the 7th and 8th grade level would be more effective.

In 2003 she started her own construction company SAW (Sister@Work) which is still operating today. She is also the Founder/Director of a 501c3 non-profit organization supporting women at risk between the ages of 14 and 24 called the SAW Youth Progam. Her goal is to guide inner city youth  "off the path of Destruction onto a Path of Construction"  by exposing them to the construction trade. Her next major goal is to become a first-time home buyer. She is shopping for a multi-family and yes, a fixer-upper would be right up her alley!

Congratulations Mikey on your hard -earned success! Thank you for sharing your experiences and supporting our mission of Building Women in Construction!