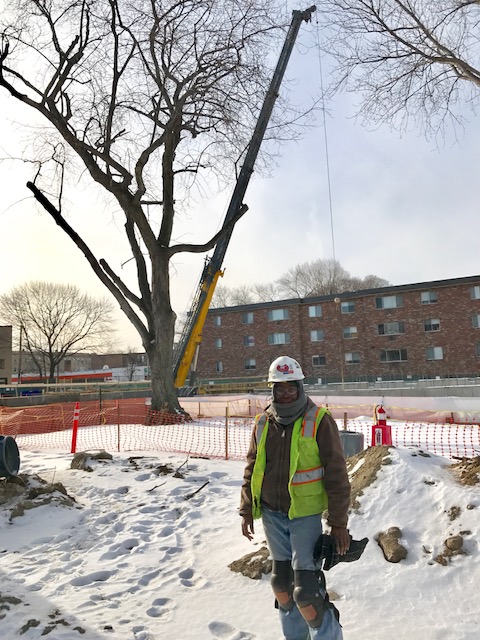 Based on data provided by the Boston Globe, in 2016 the percentage of women carpenters in Boston was 2%.  For every 50 men (carpenters) on a job site you would be lucky to see one woman. But with the help of various efforts through-out the state change could be on the horizon. Over the past 8 years the Policy Group for Tradeswomen Issues, (PGTI) have been actively working on expanding the female presence on building sites. Just recently the Northeast Center for Tradeswoman’s Equity (NCTE), a not- for- profit coalition, launched their own campaign “Build a Life That Works” encouraging inner city women to consider the advantages of a rewarding career in the trades by offering training courses and job placement. Both groups goals are to see women make up 20% of the overall work force in the trades by the year 2020.

Until then, Linda (she prefers to be called Linda) Oba is still on her own. A seasoned Steward, she has paid her dues and continues to advocate for women in her field.

One of 6 siblings, Linda was born in Trinidad. Her family moved to Puerto Rico for a short period, to Boston then eventually Columbus, Georgia where they planted roots long enough for Linda to earn her High School diploma. Once old enough she and her older sister came back to Boston and worked various administrative jobs at Mass Eye and Ear, Beth Israel Hospital and the RMV. Her first influence in the trades was in 1993 at the RMV where one of her corporate clients suggested that her boyfriend, who was looking for work “Go to the Union Hall and just sit there until he gets hired.”  Eventually that boyfriend became the owner of his own residential company which Linda helped to manage.

For 3 years she struggled with her boy- friend because although he had the carpentry skills, he could not properly manage the client relations. Linda had all the skills required to land the work and maintain those relationships but became frustrated with her lack of carpentry knowledge which could bring her career to the next level.

With their personal relationship ending, and the company closing, Linda joined the Union and earned her Associates at Wentworth in Construction Management. She says back then it was the ultimate test of “getting along”. For every person that was willing to help and mentor, there were others that were not so nice. She learned very quickly that stepping on egos would not get her anywhere and that there were other ways to attain her goals. One of those ways was making it a point to learn all that she could on every job site whether through asking questions to her colleagues, taking classes on her own time through the Union or conducting personal research. She says with all the resources available “There is no excuse to not know everything”.

To avoid getting laid off she has made it her initiative to learn all aspects of the trade and maintain a strong work ethic. Arriving to the job site on time is critical and she is careful to remain in good standing with her BA. She is proud of the fact that she has never been laid off for lack of performance and has very rarely experienced a work gap, which was financially vital for her to avoid as a single mother of two.

Currently she is working in Allston on a residential project with Hamilton Construction and is the only woman on the job site. She recently traveled with the PGTI on a journey to India to help fight for the rights of women in the construction workforce both there and in the U.S. and she volunteers her time every month for Tradeswoman Tuesdays, an open house at the PGTI office that educates local women on the career opportunities available in the union building trades. She also sits on the Executive Board as a Trustee for the Union.

Looking back, she says she has no regrets but shares she may have chosen a different field if she had been aware of all the options. She is happy to see that women today have more information and support available to them which will hopefully encourage more to join the industry.

At 48, she aspires to retire at 55 and work towards her greater potential. She knows she could be doing more (she has great organizational skills) but has still yet to identify that opportunity. In the mean time she continues to deliver a level of excellence that has trickled down to her grown children (Her daughter is a Union Electrician) and offers mentoring opportunities where ever needed.

It is through the exemplary efforts of skilled trades women like Linda of reaching industry goals of 20% by 2020 will become a reality.

Thank you, Linda, for sharing your experiences and supporting our mission of Building Women in Construction!