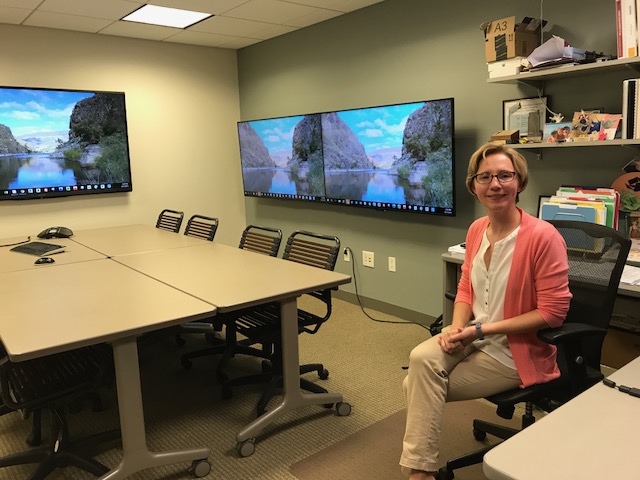 Ten years ago, you would have been hard pressed to find a legitimate full- time technology role in commercial construction. At one time, the industry was notorious for using techniques that were put in place generations ago (think-fax machine) but not so much anymore. Technology is now being embraced more than ever with tools like Building Information Modelling (BIM), Unmanned Aerial Vehicles (UAV’s), Integrated Mobile Technology and Information platforms, Automated Building Control processes and more.

Virtual Construction certainly was not on Siggy’s radar when she attended Stanford University for Construction Engineering and Management. She started out studying Civil Engineering because it was the most tangible engineering field, but then discovered the Construction side of it during her sophomore year and realized she had a passion for learning how things were built. She says her first internship with Mortenson Construction in Shrewsbury was completely “interesting and fascinating”, so that she now realized the general direction her path would lead.

Her additional co-ops included a 6-month internship in Germany working for Hochtief, the 7th largest provider of construction related services in the world, then a summer gig in Colorado where she worked at a Mom and Pop owned G.C., building her field work experience. Her final co-op was at Turner Construction and upon graduation she was hired at Charles Pankow Builders where she stayed on for almost 5 years as a Field Engineer/Project Engineer.

In 2007, she was hired at Columbia Construction as a P.M. but took a break after three years to move back to Germany for her husband’s career.

She says when she left for Germany in 2010, she was happy to take a break.  She found her life as a PM to be very stressful and constant – it was 24-7 firefighting.  She had been encouraging the use of BIM related tools prior to her leave and was using them on her own projects.  When she came back from Germany, she was interested in finding a different position within the company, which nicely coincided with Columbia’s interest to create a full time BIM position.  She was also 5 months pregnant when she came back, so her priorities were also shifting.  Siggy really didn’t want to be on call 24-7 at work while she was trying to figure out how to be a mom.  Her current position as Director of Virtual Construction gives her more flexibility in her full-time schedule to also meet the responsibilities of being a mother. She is still involved in project teams, so she can develop the relationships that are so important to her, but she also has some flexible time to explore and implement new technologies that can help Columbia and their employees be more productive and effective.

The wonderful thing about her career is that she says, “she never felt hindered because she was a woman”. She worked hard in proving herself to everyone she worked with, asked lots of questions and never pretended she knew something that she didn’t.
Now with 6 years of VDC under her belt she can look back and share some of the other elements that have helped her to succeed. She shares that relationships play an important role in not only gaining valuable advice from your peers, but also as inspiration. Networking and engaging in industry associations and committees help to establish and build those relationships, while gaining problem solving experience. As a Board of Director member for NAWIC for 9 years and AGC BWiC for 1 year, she has greatly expanded her network of personal connections.

Her office is filled with LCD screens. She says her typical day includes helping owners visualize what they are getting. Regular meetings with stake holders give her the platform to emphasize the added value by educating the client through technology services and emphasize a “we can do that” mentality while keeping expectations reasonable.

Moving forward she would like to be an integral contributor to Columbia in becoming even more productive with technology. How that plays out will depend on the new capabilities developed over the years, but that’s where she enjoys some latitude of trying things out and continually asking “how can we add even more value with this?”

She had a professor in college who to this day is a great friend and mentor.  He once said that he believed a woman in construction would be most successful if they could find a niche role.  This seemed a bit sexist to her at the time, but it stuck with her.  Maybe because she was never 100% happy in her roles as field engineer up through project manager, she was always sort of looking for the right niche.  It wasn’t Scheduling.  It wasn’t LEED.  In this position as Director of Virtual Construction, she has found her niche.  It’s BIM.  There are pros and cons to a role like this, but for now, it works quite well in her career.

Thank you Siggy for sharing your experiences and supporting our mission of Building Women in Construction!